Margot R. Leave a Comment on What You Don’t Know About Caffeine

Many people consume caffeine, but is it actually good for you or bad for you? This information may help you get a better idea of the bigger picture.

According to npr.org, caffeine is considered a drug. They state:

“Caffeine is a drug. Treat it as such. In its essential form, caffeine is a bitter white powder derived from a natural insecticide found in some plants. Over the years, it became acknowledged as a drug after people independently discovered its stimulating effect.”

Many studies show that caffeine stays in your body for much longer than you might expect. For example, a study by T.J. Demas and B.E. Statland showed that the half life of caffeine in healthy people was found to be 5.7 hours. Other studies were shown to be around 6 hours. But what does this mean? This means that about every 6 hours caffeine in the body is cut in half.

Lets do the math:

“The most marked effects of caffeine on sleep, even at levels equivalent to those of a single cup of coffee, have been well documented. They consist principally of prolonged sleep latency, shorter total sleep time, increases in light sleep and shortening of deep sleep time, as well as more frequent awakenings.” An article from coffeeandhealth.org states that many people are affected by caffeine when it comes to their sleep. It is a huge culprit to sleeping problems and sleepiness during the day due to not getting a good night’s sleep.

And the downside is that you more often than not wake up tired, and then have caffeine to counteract that tiredness.

But enough about tiredness, lets talk about the buzz.

So let’s talk about the “good side” of caffeine now. Caffeine gives you energy, makes you feel perky, gets you moving, and can increase your metabolism. The only downside is that you need more caffeine over time to get the same buzz feeling and it can be addictive.

Hmm… this sounds a little like…meth.

Methamphetamines – gives you a boost of energy, elevates mood, makes you feel active, and can boost metabolism (according to rehabs.com). You also need more and more of it to get the same feeling and it’s also addictive.

If we think about it like this, is this energy gained a positive one? Much research seems to point to > No.

One reason is that is can lead to adrenal fatigue. According to author and researcher Fawne Hansen, she states that each cup of coffee affects your adrenals.

“Your brain sends a message to the pituitary gland, which releases a hormone that tells your adrenals to produce the stress hormones adrenaline and cortisol. In other words, you are triggering exactly the same kind of stress response that your body uses when you are in imminent physical danger.”

This is also what gives us that buzz we are looking for. Sure it wakes us up, but it more shocks us awake in a stressful way, literally causing us to pump out more stress hormones.

So, coffee is bad for me?

Studies point to yes, but you have to decide if it really matters to you. If you are constantly tired and you find yourself reaching for caffeine on a daily basis, then perhaps you have a problem. If you don’t make caffeine a daily part of your routine and you don’t have any ill effects, then great! Do what works best for you. I can only say what research has been done on this topic and my own personal experience.

When I drink coffee, I almost always get jittery, I feel a weird nervous feeling for no reason, I feel shaky, I move faster (but with a stressed feeling behind it), I sometimes get a random eye twitch, I sweat more (and unfortunately it smells more than usual sweat), I run to the bathroom more, and coffee causes me to have to clear my throat a lot due to some increase in phlegm I’m guessing. Many times I experienced joint pain and headaches as well.

After a while, I decided to drastically limit my caffeine intake to 25-50mg per day. In most cases I only have 25mg per day and in rare occasion I have 50mg per day. I usually have a half cup of Masala Chai tea (black tea) mixed with a half cup of Masala Chai (red tea), which has around 25mg of caffeine in grand total. This still allows me to enjoy a nice hot tea in the morning, yet not suffer the effects I get with increased caffeine.

I am happy to say that I now have much more energy. I used to complain about low energy every day, and had to even go to bed early. I now feel more energy throughout the day and feel more relaxed overall. I also notice that I sleep deeper and that suddenly my nails have grown long and strong.

I had previously had my nails constantly break and tear no matter what I did for them. The white part would grow as far out as 2-3mm then break. A good comparison is about the thickness of 2 dimes. Now they are growing quite long without me having to do anything to them (approximately an average of 6-7mm each,  or 4-5 dimes thickness). I truly feel this is related to lowing my caffeine per day because caffeine causes you to lose minerals in your body. Your body requires many vitamins and minerals in order to keep you healthy and vibrant, and this includes keeping your nails, hair, and skin healthy. When caffeine depletes minerals in the body, this affects you as a whole, but it may first be seen in your hair, skin, and nails.

Stephen Cherniske, a best-selling author and former professor in Clinical Nutrition, wrote one of the best books on this topic called Caffeine Blues. In his book he mentions how caffeine causes a loss of B vitamins, Calcium, Magnesium Potassium, Zinc and many others. This may explain the sudden growth in my nails when caffeine was minimized.

Fingernail plates are comprised of many of these minerals, including magnesium, calcium, and zinc. Having the right amount of these minerals in the body has shown to contribute to healthy nail growth, whereas a deficiency in these minerals has been shown to cause nails to crack, split, and break off. It only seems to make sense that caffeine intake can affect nail growth.

Though I have had many side effects to caffeine, not everyone notices them. Perhaps I am sensitive to caffeine, but many studies show that my symptoms are quite common. Drugs.com has a long list of symptoms that’s quite extensive, yet similar.

But what about decaf coffee?

Decaf sounds like the answer, that is until you understand the process. One of the best statements I have read on this was from Roger Bezanis in one of his books where he talks about decaf coffee:

“Unfortunately, decaffeinated coffee can be worse than caffeinated coffee. The decaffeination process leaves 6-20% of the caffeine behind. Yes, decaf coffee still has an appreciable amount of caffeine present in the final product. Therefore you are not free from caffeine, you are merely ingesting less. Caffeine is so potent a toxin that even a 1% residue is very damaging to the body. The decaffeination process is often worse than caffeine due to the extraction process. The solvents that can be used to extract caffeine are formaldehyde (embalming solution), methylene chloride (known to cause cancer) and other solvents. There is no safe coffee of any type.”

There are alternate methods to decaffinate coffee, such as the water process, but often times it leaves the coffee tasting bland. I experienced this first hand. Although, if you can’t give up coffee, it’s still a safer option.

One interesting supporter on avoiding caffeine is Roger Haeske, also called the

40-year old teenager. The reason he is called that is because he is so healthy that he looks much like a teenager, well into his forties. The reason I mention him and his opinion is because he is far healthier than anyone else I have seen at his age. I feel his considerations are worth listening to. He also has far more energy than someone hyped up on caffeine does, and it’s lasting energy. He has an amazing workout program too (he has some free basic info about it on Youtube if you are interested but aren’t looking to buy a program).

All in all, I feel like my article is just hitting the tip of the iceberg on this topic, but it’s a great introduction for those hearing this information for the first time. I would highly recommend the book Caffeine Blues for anyone who is truly interested on this topic. If you aren’t super interested in reading a long detailed book, here is an article that is almost a Cliffs Notes summary of the book that also contains a lot of important key points on this: 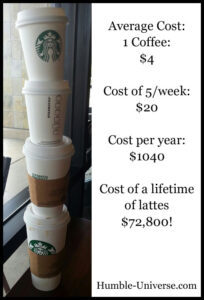 A lot for a latte!

Coffee habits can be expensive too, depending on where you buy it. You can save so much money over time if you cut back.

I hope you have enjoyed this article and the information provided. I’m sorry if I have spoiled your cup of Joe in the morning, but wouldn’t you rather be aware of what you are consuming now than experiencing ill effects in the future? What you don’t know about caffeine can still hurt you (please forgive me my Starbucks loving friends!) Wishing you all the best!